It is hard to say whether Dave Carson, award-winning pictorial chronicler of the macabre landscapes and alien creatures of H.P. Lovecraft's Cthulhu Mythos, is illustrating from some creative well of inspiration, or really just simply drawing his own family members during frequent festive get-togethers in crumbling tombs and chilly, aquatic climes.

Whatever the true nature of Carson's disposition, the fact remains that his unearthly illustrations of those things not spoken of, living in those places not visited by sane men--save for him—bring a great, but disquieting pleasure to the rest of us more fearful worshipers of Cthulhu.

Dave put down his drawing implements long enough to answer a few questions scribbled by moonlight and slid beneath his door.

How did you get started in your illustration career?

I wouldn’t go so far as to call it a career really. I’ve been illustrating books and magazines since the early eighties or thereabouts, but I also had various full-time jobs while I was doing it, it’s always been a kind of on/off thing with me. There was no way I could support myself solely on illustration. For instance, when I was illustrating H.P.LOVECRAFT'S BOOK OF HORROR, and had about a week to do it, I was in the middle of a six week contract to renovate an old School building. Grueling work to say the least, after which, when I finished for the day I had to get home and do one illustration a day for a week. The friend who I was staying with while the work was going on had to keep me awake with coffee just to get the drawings finished on deadline. Some nights I just fell asleep on the floor with exhaustion.

Of course for the past ten years I have had no other kind of job to get in the way, but now I’m more interested in doing sculpture and digital artwork rather than the laborious process of black & white stipple drawing. I do miss it at times, but I rarely feel that it’s worth the bother of putting pen to paper.

When did you begin drawing Lovecraftian landscapes and their denizens?

1978. Seriously. However, I’ve been doodling all kinds of monsters my whole life. 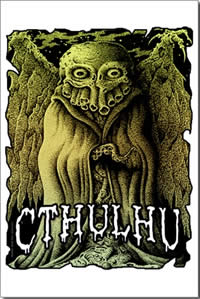 What is it about Lovecraft's alien, ichthyoid characters that fascinate you?

Possibly it’s that I’ve always been interested in animals, natural history and the sea, as well as having a life-long obsession with all things weird. That’s what inspired me to start drawing them. I love all those winged, tentacled, gelatinous masses, starfish-headed things, deep ones and others that shamble through his writings.

There seem to be a common misconception that H.P.L’s entities aren’t clearly described. I have no idea why this should be, as many of them are fleshed out in great detail. I don’t know how many times I’ve read that “Lovecraft’s descriptions are vague to say the least”, or similar nonsense. Just read THE CALL OF CTHULHU for instance, a clearer description of Cthulhu is hardly possible.

Why do you think Lovecraft's mythos continues to be a popular and influential fictional and graphic wellspring?

It's taken some time for Lovecraft to reach the audience he now has. When I discovered him back in the mid 60's relatively few people outside of fantasy and horror fandom had heard of him until all the paperbacks of his stuff became very popular later that decade. They influenced a whole new generation of writers who had never even seen a copy of Weird Tales. I guess the Cthulhu Mythos appeals to artists on the basis of its incredible possibilities and scope for their imaginations, and writers for the same reasons.

How do you do it? Tell us about your creative process from inception to finished drawing.

I do a pencil rough and ink it in, usually with Rotring technical pens – no great secret process. Just hard work, long hours, a sore back, strained eyesight, etc.

Who are your favorite illustrators and why?

Lee Brown Coye is my favorite. His work was extremely strange and remarkably original. Harry Clarke’s work is also outstanding.

What question would you like to be asked and what's your answer?

Q : “Hey DC, did you see on the News that R’lyeh has risen in the Pacific?”

What's your favorite Lovecraft story? Why?

It's 'The Call of Cthulhu' without a doubt. I love ‘the piecing together of dissociated knowledge’ element throughout the story, and the references to artists and sculptors being more susceptible to Cthulhu's dreams appeals to me.

What is the easiest and the hardest thing about being an illustrator?

Easiest is being able to work through the night and sleep during the day. Hardest is being broke all the time.

Posted at 04:03 AM in Art/Animation | Permalink