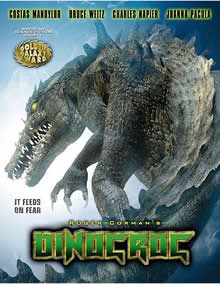 How does one describe a movie that's bland? I'm fighting the temptation to go off on a tangent with sentences with the word 'crock' in them. While that might help spice the review, it's an obvious but cheap shot.

This movie is a crock. Its bland by the numbers characters and action, with bland superficial dialog, and less than stellar computer graphics work. Jake Thomas plays Michael Banning, and actually does as good a job as any of the other actors; but he's not given much to do. At least they didn't spike his hair. Thomas spends the movie riding around on his bike looking for his dog Lucky, the three-legged run-away.

Then there's the evil corporation, Gereco--stop me if you've heard this one about an evil corporation--conducting secret genetic experiments on man-eating monsters. Rabbits won't suffice? These experiments blend the genes, by accident, of a Sarcosuchus and a dinosaur. The resulting monster escapes its holding pen because an idiotic scientist walks right in--as it's killing everything else in the pen--leaving the door wide open. She gets her throat ripped out as she tries zapping it with a pocket-sized stun gun. 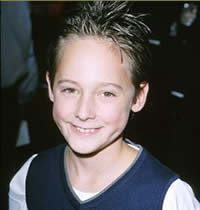 Joanna Pacula plays the evil mouthpiece for Gereco, Paula Kennedy, who denies everything even as they send their top, man-eating monster hunter to recapture the monster. Using Lucky, the three-legged dog for bait, Lucky really turns out to be lucky and high-tails it just as the crafty hunter gets eaten instead, leaving only his legs behind. The CGI blur happens fast, but dotes on those legs.

One of the highlights in this film--I'm stretching a mile here-- is what, unexpectedly, happens to Thomas as he goes searching for Lucky late at night in Gereco's wildlife preserve. What happens ends too abruptly. What should have ended abruptly are the dialog exchanges between the crocodile hunter they bring in, Dick Sydney (Costos Mandylor), the Grant's Lake Animal Shelter control officer, Diane Harper (Jane Longenecker), and Michael's brother, Tom Banning (Matt Borlenghi). The action bogs down when an old romance--queue the piano tinkling--is rekindled and the hunter tries some really bad pick-up lines.

A predictable insert-scene-here time-killer has two drunk hunters poaching on the Gereco wildlife preserve; quickly scratch off two poachers. To speed things up, the Gereco scientist hunting the monster spills the beans about the whole mess to Harper and Tom and they volunteer to help. As they search in the preserve, they come across a pile of man-eating monster doo-doo and the scientist quips "Holy sh*t."

Dinocroc Vision kicks in as the monster gets hungry. I don't mind monster-point-of-view vision--I love the Snake 'o Vision in Snakes on a Plane--but here it's not very inspired or enhancing. Another oddity is how all these would-be hunters carried only single-shot rifles. What, automatics would've blown the budget? The thing's as big as a mobile home and they hunt it with pea-shooters.

The scientist goes down for the count when the group crowds a skimpy motor boat and tries to hunt Loc Nesses' land-legged cousin with single-shot rifles and tranquilizer darts. More people get eaten as people crowd the water's edge for some relaxing horror movie-victim involvement. The local sheriff's Keystone Cops deputies get eaten. Lot's of people get eaten. Mostly off-camera or in "shaky-cam" CGI blurs. There's no suspense, no build-up to a climactic ending that brings the beads of sweat to your brow.

I really really wanted to see Lucky either get eaten or save the day. Instead, they use other dogs to lure the monster into a trap. The animal-loving Harper doesn't go along with this so she's cuffed along with Tom after he tries to help her. But Tom is a metal-sculpting artist. He lights up the acetylene and before you can say I should have watched Rogue, they're racing ahead of the dog-eating monster to release each and every stray dog chained between the monster and the trap. As they race against time to free the dogs and come closer and closer to the trap, the hunter finally does something and jumps in to lure the monster away from them. They start yelling "Dick! Dick!" as the monster gets closer to him, in passionate close-ups of concern. It is funny I admit.

The trap is sprung, but since they only have one bolt cutter to release all the chains holding the trap's doors, the sheriff must race from one end of the long trap to the other to release the doors to lock the monster inside. But the monster gets out and chases Harper and Tom some more. It finally gets run down by a train and Tom determinedly walks over to its stunned, prostrate body to poke it in the eye with a metal rod. It doesn't move.

Not much in this movie does.

This is one of those rare instances when the review is better than the movie. Sadly, I saw this horror when it aired on the SciFi Channel. I didn't think anything could be worse than Jaws 4, but Dinocroc proved me wrong. Thanks for this.