"Dude," said Mr. Blackbird. His illuminated plumage blinded me. It pulsated in kaleidoscopic colors that shot out rays of reds, greens and blues.

"What," I said. My vision was hazy and my voice sounded dull, like I was talking under water.

"Dude," he repeated, and said something else, but I couldn't make it out.

It sounded like tweeting. What a funny blackbird. With red human lips it kept repeating something, but it sounded like tweet, tweet, tweet. His pinky finger—wow, crazy, the bird's got a little white hand at the tip of his wing—had a little gold ring. What was that he was repeating? Door of indigo and blues across the street, across my way. What was that? You want me to knock a rap in ones, threes and twos, with these knuckles of mine. On that door of indigo and blues?

I shot awake. "What happened?" I looked up at Pete, my movie-mate. He was bending down looking at me. The last thing I remember was sitting in the theater watching The Descent.

I had asked him to tag along because I hate cave films. I hate caves. I hate tight places that remotely look like caves, and the whole damn idea about squeezing your ass through narrow cracks in rock walls that I couldn't even fit my wee-willy through is stupid and insane.

"Man, what the hell happened to you?" he said. "You started screaming and jumped out of your seat. You ran to the concession stand screaming "don't eat the Milk Duds, it's people! Milk Duds is people!" You scared the crap out of me. Crazy bastard." Pete looked at his watch. "Great, man. Just 'effin great. Just when it was gettin' good, too. Look, the next show is in a half-hour. With you or without you, I'm seeing the 'effin movie."

With his help I managed to sit through the entire film. It wasn't easy. I kept closing my eyes, but what I did see was white knuckle-busting horror that took it's time to build, then whumps you over the head until you can't take it anymore. Sam McCurdy's cinematography is spot-on, and walks a fine line between darkness and light, as electric and flare lights feebly illuminate the glistening cave walls. He tosses in reds and greens, too, to create an alien landscape that heightens the terror and claustrophobic atmosphere.

Neil Marshall's direction and writing tricks you at first. You don't think it's a horror film. Hell, the damn thing starts off like an Ingmar Bergman movie. I kept wondering when Max von Sydow would show up and play chess with dusty Death himself.

It opens on a happy note, suddenly takes that away from you, and never lets up until the end. The music is also more elaborate than your typical horror film, and it wisely stays out of the way in the most important parts. And those parts are killer.

Six highly-testosteroned women love to take chances. Their alpha-leader, Juno, pushes the envelope for them. She's relentless: a go-getter and athlete to the extreme. Interestingly, Marshall has ironically given her the name of the Roman goddess who is the protector of women and marriage. She fails on both counts, and it's this failure that provides the impetus for the group's fracture.

So off they go on another adventure, only this time she thinks they should really tackle something big. She doesn't bother to let the other five know that they're going to an unexplored cave, and not the one with that all-important guidebook now left in the SUV. Bingo! The cardinal rule of a good horror film is to have potential victims always muck it up by doing downright dangerously stupid things. That includes exploring an unfamiliar cave, not telling anyone about it, and not bringing Twinkies along.

There's a J-Horror pacing to the film. Marshall takes his time, dwells on their tenuous relationships, their camaraderie, their different personalities, then shakes them all up once they hit the cave and everything goes wrong. Just how strong are they really? And how much do they really know about each other? This is what's tested in the cave. The cannibalistic, sub-human troglodytes crawling around the cave's walls are only part of the horror. Yes, a really big part of it, but the reality of being trapped in a cave, where it's pitch black, damn tight, with no guide book—and you didn't pack any Twinkies—well my friend, that's horror done to a masterful level. Turn it up a notch with shaky, can't-rely-on-you relationships, and that makes matters much worse.

Don't let me spoil it for you, but the cave scenes are, like their team spirit, all smoke and mirrors, too. That's right; miniatures, model sets, and blue and green screens are so skillfully used, you'll be huffing and puffing and gasping for breath without realizing it. You'll start to feel the theater walls closing in on you when the women start crawling through too-narrow passageways on their bellies. That's where I lost it the first time. Talk about being caught between a rock and a hard place. And when they dangle over a chasm that drops down all the way to China, in the pitch blackness by their fingertips, I'll bet even money you'll be kicking the back of someone's chair and squirming in your theater seat for the tension to end.

But the tension keeps building until they stumble into the cannibalistic crawlers’ equivalent of a McDonald's. That's when we find out if they really do know each other or even themselves for that matter. The bloody attack sends them scrambling into different directions in panic.

The struggle for survival is fast and furious, and filled with shocks. In true horror movie fashion, the only well-knit social group turns out to be those disgusting—vegetables? what's-that?—cave crawlers. The make-up job is horrific and detailed, and the annoying habit they have of slobbering mucousy gobs out of their mouths will—you better hold the buttered popcorn for another movie, that's all I'm saying. The ticking sound the crawlers use like sonar to find their prey is also unnerving.

In the heat of battle, Juno proves to be the first one to fight back. She's also the first one to commit another blunder that proves having a lump in your throat is better than a sharp pickax sticking out of it. Her inevitable confrontation with Sarah, amid all this chaos and death, doesn't improve the situation, either. Why do characters in horror movies always wait until the worst times to picking a fight with each other when the monsters are getting closer?

The filming for The Descent took place in the United Kingdom, with the cave interior scenes filmed on sets built at Pinewood Studios. There are two endings, the UK version or the U.S. Depending on whether you like your horror movies ending on a woo-yay or hell-no, take your pick. Hint: U.S. movie goers apparently like happy endings. 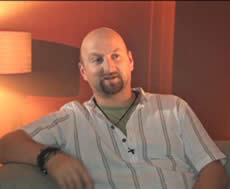 Another solo interview with Marshall has him discussing the long and short versions for the ending. He prefers the more downbeat, longer (UK) ending, and goes on to explain why the shorter version is a bit confusing, as it was an editing choice, not an original plot choice. Test-marketing shot up a few more points with the more upbeat shorter ending, so that's what American audiences saw in the theater.

More extras include a stills gallery, deleted and extended scenes, blooper reel, cast and crew biographies, and a behind the scenes documentary.

The Descent is a scary and shocking horror film that shouldn't be missed.